skip to main | skip to sidebar

We have formulated a naming convention to keep track of garlic grown from seeds. All systems of nomenclature have strengths and weaknesses.  Other naming conventions may well be better, but the one we have employed has served us reasonably well so far. It is as follows:


The name consists of “S” indicating origination from seed, followed by the year the seeds were planted (we always plant the garlic seeds the year following harvest), followed by the name of the mother plant (we have not done controlled breeding where the other parent plant is known). So, for example, S10BrownRose is the name for seeds planted in 2010 from the mother plant Brown Rose.


If the plant does not produce a harvestable round or divided bulb in the first year, the subsequent year is appended. So, if S10BrownRose does not form a round or harvestable bulb until the second year, the name designation becomes S10/11BrownRose.


Seeds that successfully grow out represent potentially unique cultivars, so a number is appended to designate each.  A “1” indicates the plant with the largest round or bulb in the first year followed by “2” for the second largest, and so on. For example, if the seeds yielded four rounds or bulbs, they would be named S10BrownRose1, S10BrownRose2, S10BrownRose3, and S10BrownRose4 in rough order of initial round or bulb size. Plants that did not form a harvestable round or bulb in the first year would be named S10/11BrownRose1, S10/11BrownRose2, and so on. The name and numbering in subsequent years remains the same even if the relative bulb size changes.


While the naming convention may seem a bit ponderous, it does allow a relatively precise tracking of the parentage and generations. Reportedly, subsequent generations of seed-produced garlic tend to yield more seed with greater viability, fewer genetic aberrations, and with less  need for removing bulbils to produce seed. The naming convention fosters tracking and assessment of these reported tendencies. If more sophisticated breeding techniques are employed so that both parents are known, this could be incorporated into the naming convention, for example, S10BrownRose x Shvelisi, and so on.


Ideally, these reference names would continue to be included in listings even if more marketable names are given, e.g., “Uncle Clem’s Blue Mountain Special (S10BrownRose3-13/14B),” much in the way that references to currently marketable cultivars may include germplasm reference numbers, such as the USDA accession number, e.g., “Belarus (PI 540355).”

Email ThisBlogThis!Share to TwitterShare to FacebookShare to Pinterest
Home 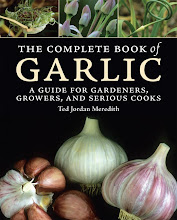 The Complete Book of Garlic: A Guide for Gardeners, Growers, and Serious Cooks 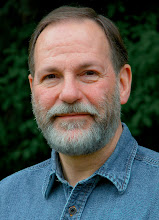 Ted Jordan Meredith
Ted Jordan Meredith has written books on viticulture, enology, wine appreciation, garlic, and bamboo. His "Bamboo for Gardens" (Timber Press 2001) was awarded the Council on Botanical and Horticultural Libraries Literature Award and The New York Times Editor's Choice for Best Books for Gardening. His newest book, "Timber Press Pocket Guide to Bamboos" has been a Timber Press best seller. His benchmark work, "The Complete Book of Garlic: A Guide for Gardeners, Growers, and Serious Cooks" (Timber Press 2008) has become the definitive reference for garlic enthusiasts.